Taruni Gandhi, Chandigarh : Punjab Chief Minister Bhagwant Mann called on Prime Minister Narendra Modi in New Delhi today. This is his first meeting with both the leaders after becoming the Chief Minister. This is a courtesy call on Mann to meet PM Modi.

During this, he asked for a package of Rs 50,000 crore annually for two years for Punjab.
Though on the other hand, Aam Aadmi Party Convenor Arvind Kejriwal claimed to have counted each penny of Punjab to bring back its financial stability from the available sources only. The Social media enthusiast are questioning AAP on this demand of Rs 50 K Crore.

We need the support of central government : Bhagwant Mann

We need the support of the central government to maintain national security, Bhagwant Mann told the media after meeting Prime Minister Modi. The economic condition of Punjab is dooming. We have demanded a package of Rs 50,000 crore per year for two years to improve the financial condition of the state.

It is said that Bhagwant Mann raised many other issues including the withheld amount of Rs 1082 crore of Rural Development Fund while meeting PM Modi. After meeting the PM Bhagwant Mann met the Chief Minister of Delhi and AAP’s Convenor Arvind Kejriwal. It is believed that the Chief Minister also raised the issue of the Bhakra Beas Management Board and its change in the rules for the appointment of members and border security.

Even though Chief Minister Bhagwant Mann is saying that this is a courtesy meeting, it is believed that during this meeting, the Chief Minister is believed to have raised Rs 1082 crore due to the RDF of Kharif season, changes in the rules and limits of the permanent member of Bhakra Beas Management Board. 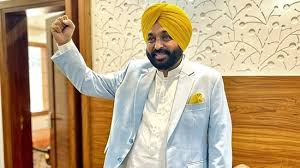 Discussed about security. Because, all these issues remain big political issues in Punjab. The RDF for the Kharif season of Jab comes to Rs 1082 crore. The central government has not given this amount yet. The Central Government had warned Punjab that the money from the Rural Development Fund for the purchase of food grains cannot be spent on repayment of farmers & loans.

Former Finance Minister Manpreet Badal had assured Union Food and Supplies Minister Piyush Goyal that the Punjab government would bring an amendment act in the assembly to remove the one percent item in which it has been provided that this money will be used for loan waiver of farmers and laborers.